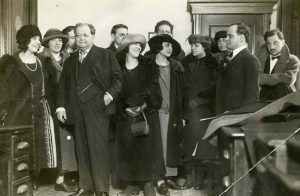 On March 6th, 1923, the entire cast of God of Vengeance, who had just recently premiered the English language version of the famous Sholem Asch play were arrested for charges of obscenity. Below is a translation of an article from Der Forverts published on March 7th, 1923 chronicling the events of the arrest and coming trial:

SHOLEM ASCH’S “GOD OF VENGEANCE” IS JUDGED IMMORAL BY RELIGIOUS CONSERVATIVES AND THE ENTIRE BROADWAY TROUPE WILL BE CHARGED.

A Grand Jury accused all actors and actresses who were performing in Sholem Asch’s English language play.— Lawyer argues that the play is not immoral and brings the opinions of Abraham Cahan and Mary Garden.

Yesterday, in response to the argument that “God of Vengeance,” the dramatic play by Sholem Asch that is currently being performed in English at the Apollo Theater, is immoral, a Grand Jury gave out charges to all actors and actresses who performed in the play, as well as the manager and one of the owners of the theater.

All together, sixteen people were arrested for putting on “God of Vengeance” including famous actor Rudolph Schildkraut, who was acting in the main role in the play. Others arrested were the lawyer, Harry Weinberger, who is the manager of the play, and one of Selwyn brothers, who are the owners of the Apollo Theater.

Ever since Sholem Asch’s play was set to be produced in English, the “moral police” have maintained the argument that the play is immoral and were looking to moderate and suppress it. Until they, at last, successfully compelled the District Attorney’s office to begin an investigation and charge the actors, actresses, and management.

Today at 10:30, all the arrested cast members need to present themselves before District Attorney O’Neil in the District Attorney’s office. People expect that after today, warrants will be issued for those arrested and they will have to appear before Judge Crane in General Sessions Court.

The manager of the play, Mr. Weinberger, himself a well known lawyer, is sure that he will win the struggle with the religious conservatives for Sholem Asch’s play. He believes that not only is “God of Vengeance” not immoral, but that the play is a first class work of art. He shared the opinion of the famous opera singer Mary Garden, who expressed that “God of Vengeance” is the most moral play on Broadway. To prove that Asch’s drama is a work of art, lawyer Weinberger brought the forward that Abe Cahan, the editor of The Forward, wrote for the English publication of the play, which will be sold at performances at the Apollo Theater. 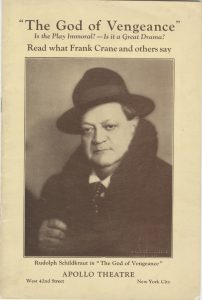 Harry Weinberger, the civil rights lawyer and manager of the production of God of Vengeance served as his own defense lawyer, as well as the other accused cast members. As a man who had dedicated his career to civil rights, he took the charges very seriously as they  dangerously undermined freedom of speech and expression. In the coming months, he would compile a pamphlet entitled “The God of Vengeance: Is the Play Immoral? Is it a Great Drama?” He garnered figures such as Frank Crane, Abe Cahan, Constantin Stanislavsky, and Eugene O’Neill to write in defense of God of Vengeance for the pamphlet. Sholem Asch himself wrote the final contribution for the pamphlet in which he defended his work and criticized how the American public and religious conservatives had judged  the play.

He wrote that when originally approached to have God of Vengeance translated into English, he refused, “since I did not believe the American public was either sufficiently interested or adequately instructed to accept ‘The God of Vengeance.”” But he was equally scathing of his Jewish critics who found his work to not be a good enough representation of Jewish life. As he said, “I think that the apologetic writer, who tries to place Jews in a false, even though white light, does them more harm than good in the eyes of the Gentiles.” But despite this, when the obscenity case was brought to trial in May of 1923, all of those accused were found guilty. The conviction by a jury was the first of its kind and only the second ever case in New York State to be tried under an obscenity law statute. Below is a translation from Der Forverts of an article published on May 24th, 1923 explaining the incidents inside the courtroom:

ALL ARRESTED FOR PERFORMING “GOD OF VENGEANCE” FOUND GUILTY.

Rudolph Schildkraut, another eleven actors and actresses and the manager, lawyer Harry Weinberger, are declared guilty for performing and producing an immoral play. The highest penalty is 3 years in prison and a $500 fine, but the judge promises to be mild.

For a minute, the court was ruled by a dead silence. No one had expected that as the verdict. Then, the clerk began to call out the names of the accused, and all of them were made to stand before the judge’s bench and answer how old they were, what their profession was, where they were born, and so on.

In a speech before the jury, for the defense, lawyer Harry Weinberger explained that the trial is very important, not only for the accused, but also for freedom of speech and freedom of the press. He then recited a scene from the play and at the end, declared: “I challenge the district attorney, that he should, here in court, read the Bible story of David and Bat Sheva or of Amnon and Tamar, which deals with the sinful love between a brother and a sister, or excerpts from Song of Songs, or the famous lines of Shakespeare’s plays, and should he then say, that ‘God of Vengeance’ is obscene!”

Assistant District Attorney Wallace, in his speech, said that Weinberger was a “hypocrite,” because although he said that he disavows nothing of what occurs in the performance he also didn’t want to admit that certain well-known scenes occurred as described by the prosecution’s witnesses.

All the defense witnesses that were called: Abe Cahan, the editor of the “Forward”; Villard, editor of the “Nation”; Professor Overstreet from City College; George Simpson and others, Mr. Wallace completely disparaged.

“These people,” he said angrily, “are not interested in art or drama. It doesn’t matter to them. They marched to witness chair and back because they wanted, as people like them should, to be named in the press.”

The District Attorney then started interpreting the play as he understood it and ended with a declaration that a production such as this will never be seen in America.

After this, Judge McIntyre had a short speech, in which he agreed with the jury’s verdict: “At last, the time has come,” he said, for the theater in New York to be cleaned up. ‘God of Vengeance’ has been condemned by Jews, like Rabbi Silverman and others. According to them, the play does not communicate the right message about Jewish life and doesn’t paint the Jewish woman in a good light.

The judge later stated that he would treat the “guilty” charge as mildly as he could. The sentencing was postponed until June 22nd.

The most severe punishment for the crimes of the 12 actors and actresses and their manager, lawyer Weinberger, who were found guilty is 3 years in prison and a $500 fine.